Ithra Dubai’s, ‘One Za’abeel’ is just not another skyscraper, but is undeniably expected to be an iconic landmark in the Dubai skyline, setting in new standards for engineering and design. The landmark claims to ‘reshape the emirate’s skyline’ with a design which shall make the building synonymous with the city.

The construction of One Za’abeel project is enormous ($1 billion) and complex. It includes two monumental towers (Tower A and Tower B) standing at 300 and 235 meters above the ground level, in between of which it has to be ‘linked’ via the world’s largest cantilever – a 228-meter-long panoramic sky concourse providing a 360-degree view of Dubai. The cantilever is a 9,000-ton structure and will weigh about 13,000 tons once it is assembled and the interiors are completed. Foreseen to be an iconic landmark, the building is expected to attract huge number of visitors as it will include a mall, a luxury hotel and multiple leisure activity zones. The construction of the project began in 2017, in presently under construction and the place is estimated to open in Winter 2021.

The One Za’abeel project is a combination of cutting-edge design and technological advancements. In 2017, the project contractor for this project, ALEC Engineering, used drones, BIM, 3D and 4D modeling to ensure that dozens of stakeholders, including architects, engineers, and contractors, could collaborate, coordinate and communicate at the same time and lead the construction plan. In the initial phases of the project, drones were used to survey the project site to capture spatial data and in future supplement the modeling process. Additional geospatial tools were used to capture imagery (LiDAR, aerial imagery) and build different scenarios to understand the risks and the construction environment of the project.

The contractor also used 3D modeling in each aspect of the build phase, which included critical elements of construction such as the steel frame, mechanical systems and concrete. 4D BIM, which is the ‘time’ dimension, allowed engineers to plan and conduct predictive analysis, to anticipate potential problems, and to track and monitor all processes before beginning with actual on-site construction. The imageries collected from drones were used to compare the digital simulations created during the modeling process to ensure timely delivery of the project. The use of 4D modeling, in particular, Bentley’s SYNCHRO technology, in a project of such enormous size and complexity, helped stakeholders to visualize as granular and nuanced picture as possible of the project in its entirety and make any alternative design changes before the construction could begin. Using Synchro, the architects and engineers could test all possible scenarios to get the ‘best constructible’ scenario.

The technology was particularly helpful in clash detection. One particular instance was when stakeholders could timely identify the clash of a crane at Tower A with the plan for the steel bridge, leading to cost and time efficiencies. The clash could delay the construction of the steel structure if the 4D model had not detected the potential clash on time. The 4D model of the construction environment, allowed the engineers to shift the tower crane opening to a below level and jump ahead to avoid the clash and complete the construction of the steel structure on time. 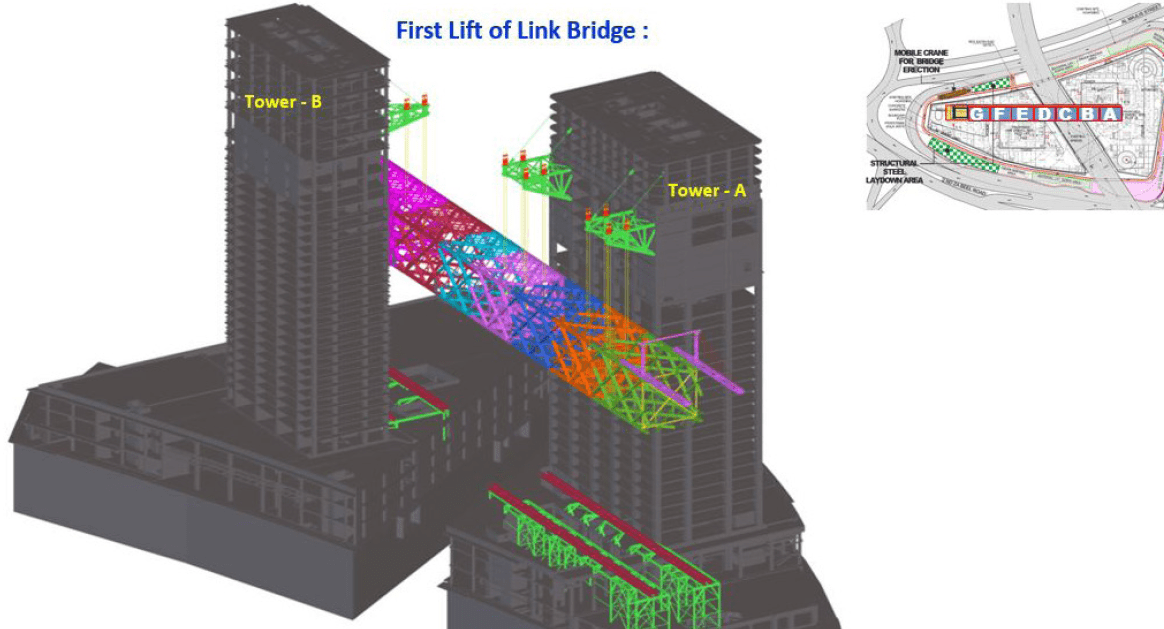 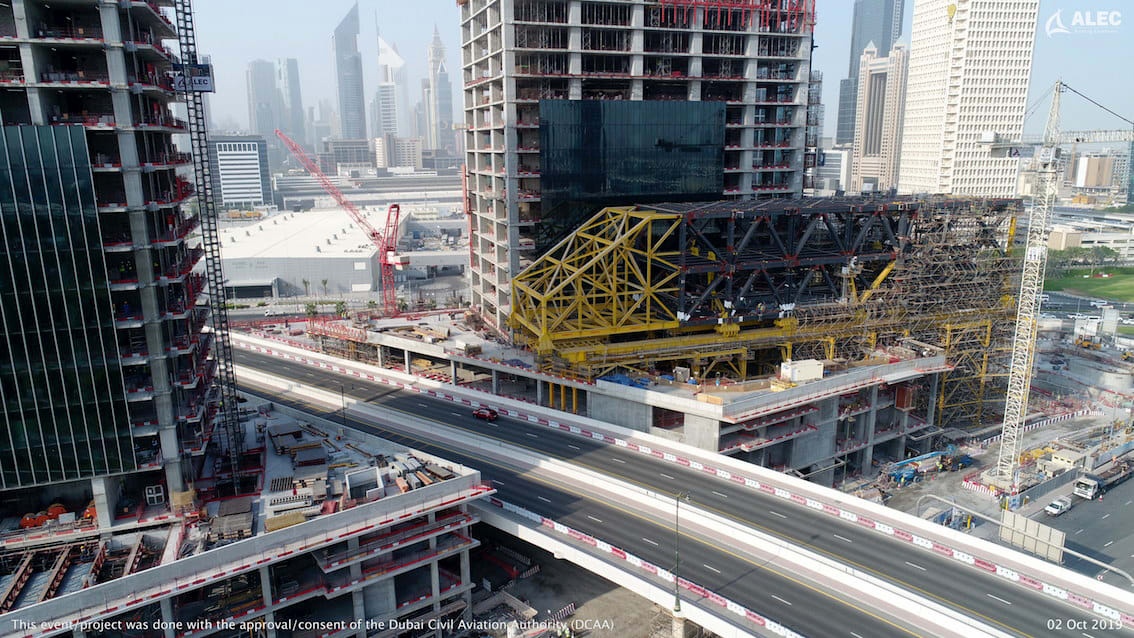 World’s largest cantilever ready to be established between Tower A and Tower B; Situation as on 02 October 2019 (Image Source: ALEC Engineering)

The visibility of the aforementioned clash, ahead of time helped the project save at least $12 million. The use of 4D models along with drone imagery in particular, helped provide stakeholders timely insights to unforeseen risks, and increase the performance of the project. It also reduced the manual work, increased efficiency in communication and improved decision-making during the construction process. The project is still under construction and up until 2019, 4D modeling has resulted in reducing 70 days of the schedule owing to early clash detection and better planning. In addition, the project has up until now save $16 million by having a clear idea of the schedule, precise visualization and visibility of the structure and improved communication.