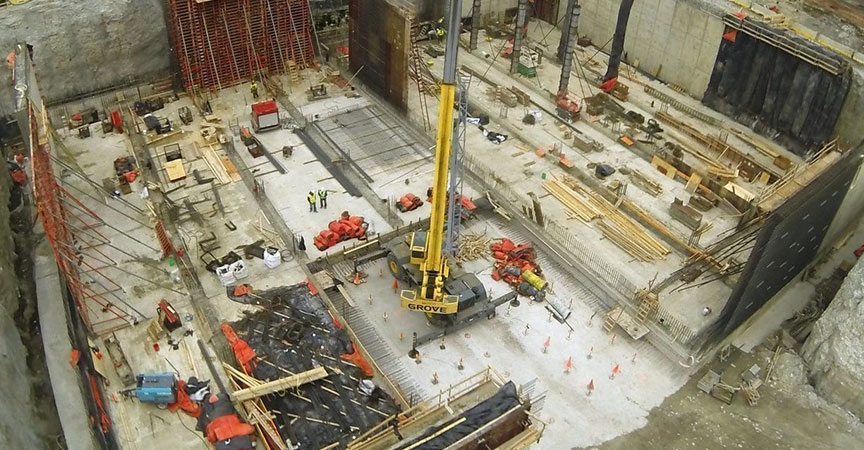 In Chicago, heavy rainstorms continued to push to capacity the metro’s waste treatment facility leading to urban flooding affecting homes and businesses in the city. Overseeing the problem, and to reduce the destruction caused by flooding, the Metropolitan Water Reclamation District (MWRD) undertook the construction of a new waste-water treatment plant in Lemont.

The Metropolitan Water Reclamation District (MWRD), initiated a project to construct a diversion structure for high-level emergency overflow. The reservoir included an in-ground structure of 215X165X30-feet deep, reliable and leak-proof to handle overflow from the most significant floods. The project also included a new pump station, separator and disinfection, and yard piping and tie-ins to an existing electrical and controls distribution system. According to MWRD, the Lemont plant would benefit from a new $30-million Wet Weather Treatment Facility to help improve storm water management.

For the project, Joseph J. Henderson & Son, Inc., based in Gurnee, III, won the contract for the construction of the overflow reservoir structure. For the purpose of monitoring, Henderson used Topcon GLS-1500 Laser Scanner to create point clouds of the excavated sheer walls to monitor water movement. The laser scanner was easily portable and required only one person on ground to operate on the site. The scanner’s on-board data collector has the ability to function as a stand-alone laser scanner with no connection to a compute and captured data at 30,000 points per second at a range of 500 ft (150 m). The robotic total station was set to send 3D laser scanner point cloud data from the site on cloud.

Using the laser scanner, weekly surface-to-surface was conducted, and point clouds were registered to identify and assess the deformation in the rock walls. Using the laser scanners, Henderson conducted scan of different points together and then combining/integrating the two scans together – making it one big scan and easier to register on the system. To validate their findings, the contractor also made use of the total stations to verify accuracy and point integrity. Any missed registered scan-data, critical for deformation monitoring was registered with high accuracy using cloud-to-cloud registrations. Following the registration process, the ‘residual’ reports were studied and analyzed to evaluate and plan for the errors in the project. Cloud-to-cloud technology enabled the contractor to interact with all stakeholders in a common data environment, thus making decision-taking faster.

The different point clouds collected from the laser scanner was recorded and registered using the Topcon’s ScanMaster 3.0 Office Software. The point clouds were later exported into Bentley’s Power GEOPAK – an information rich model integrated with CAD, GIS, and business tools, wherein the precision points collected from the laser scanner were overlaid onto 3D models created by the project engineers. This enabled the contractor to compare the actual dimension of the excavator to the site design and in future avoid any clashes. The ScanMaster’s built-in CAD functions allowed the construction/operations and maintenance company to collaborate with stakeholder and provide accurate data in real-time meeting the needs of the engineering firm as well as the city. The GEOPAK’s thematic mapping function helped the contractor make use of solid modeling functions and leverage its ability to view data relative for the project, such as as-built of new utility lines. Further, different formats of the point cloud data were also put in the AutoCAD Civil 3D for the development of the presentation materials.

The use of the laser scanner provided J.J. Henderson with an accurate 3D model of the reservoir with at least hundredths of an inch accuracy. Since majority of the program could be done on one program and on cloud, the MWRD found the point-cloud data captured from the location and the 3D models created from it to be useful for future expansion projects for the reservoir.

The use of laser scanner helped the MWRP restore confidence of the authorities of the resilience of the cities from unstable weather conditions in the region i.e. flooding. Using the laser scanner has been critical to the company’s effectiveness and productivity for the long-haul.