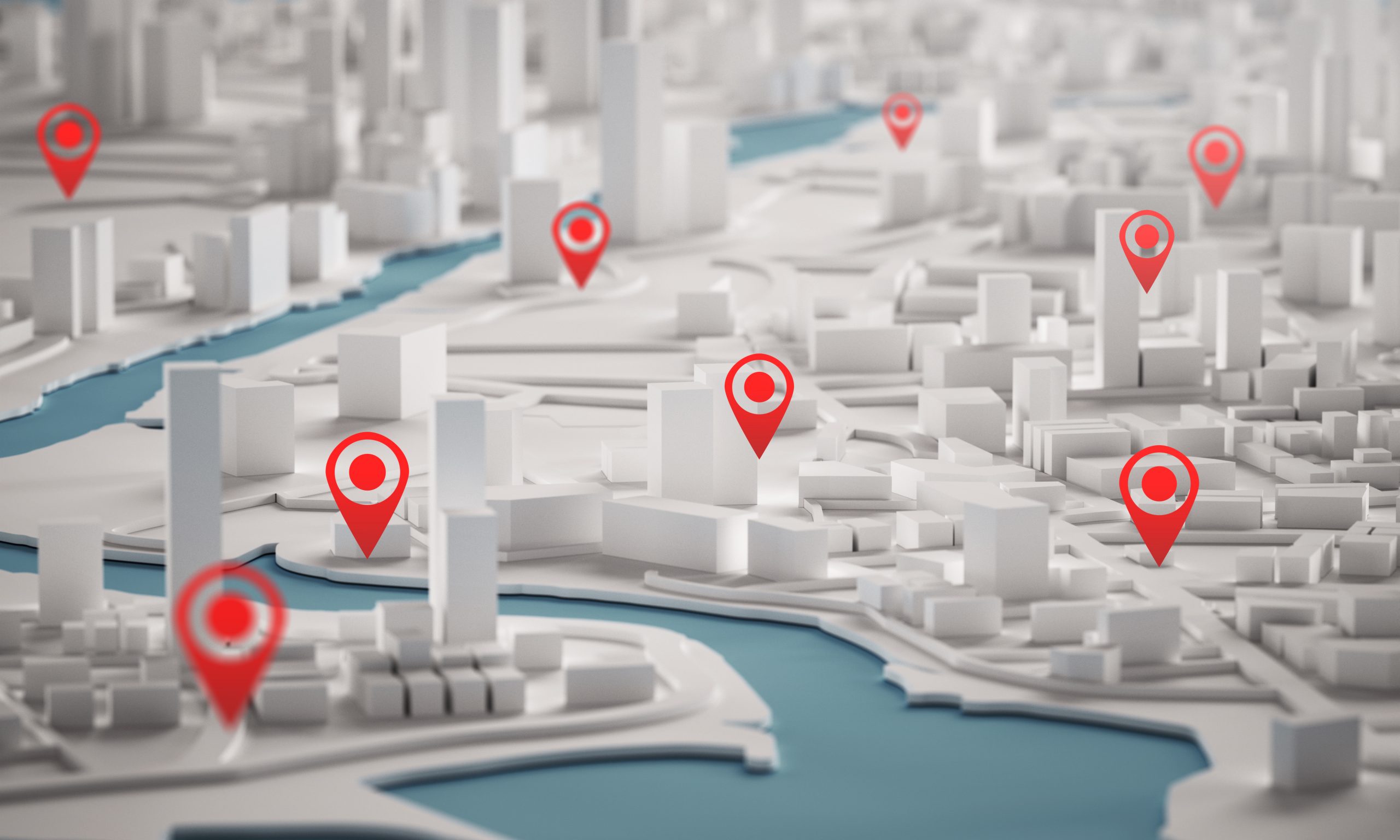 Knight Frank is one of the world’s largest global real estate consultancy. Founded in London in 1896, its global network today encompasses 500 offices in 60 territories and more than 19,000 employees. The firm manages over $817-billion worth of commercial, agricultural and residential real estate annually.

Location data is at the core of operations and services at Knight Frank, and is used to understand spatial, demographic, economic and other factors affecting the property markets. This is done, for example, by producing multi-criteria site evaluations and client-facing interactive mapping.

Knight Frank has an award-winning geospatial team that provides answers to various questions about property market using GIS and other cutting-edge data visualizations.

“Real estate sector has been slow to adapt to all the opportunities technology provides. Although many bright minds are pushing boundaries and adding value, true value can only really be unlocked if everyone is involved in feeding into and using the data and technologies,” says Dewi Spijkerman, Senior Geospatial Analyst at Knight Frank.

Knight Frank conducted a study on behalf of the Ministry for Housing, Communities and Local Government (MHCLG) in England to look at how government-owned land can be used more effectively, including assessing if it could be released and put to better use, including for home building.

It decided to look at the extensive amount of potential development land tied up across England’s car parks. The precise location and extent of every surface car park in England in public ownership was mapped to identify redundancies in provision as well as opportunities for reuse.

The analysis found that 91% of public sector surface car parks actually have another such car park within a 5-minute walk, 21% offer parking for a primary retail center, 13% only offer provision for secondary retail, and that the remaining 66% don’t appear to support any retail center whatsoever.

Through location analytics, 15% of car parks were identified as best-situated for housing in areas with already high public transport connectivity. The study highlights that government-owned car parks could hold the key to 110,000 new homes, and could raise a potential £6 billion ($7.6 billion) in land sales for HM Treasury. 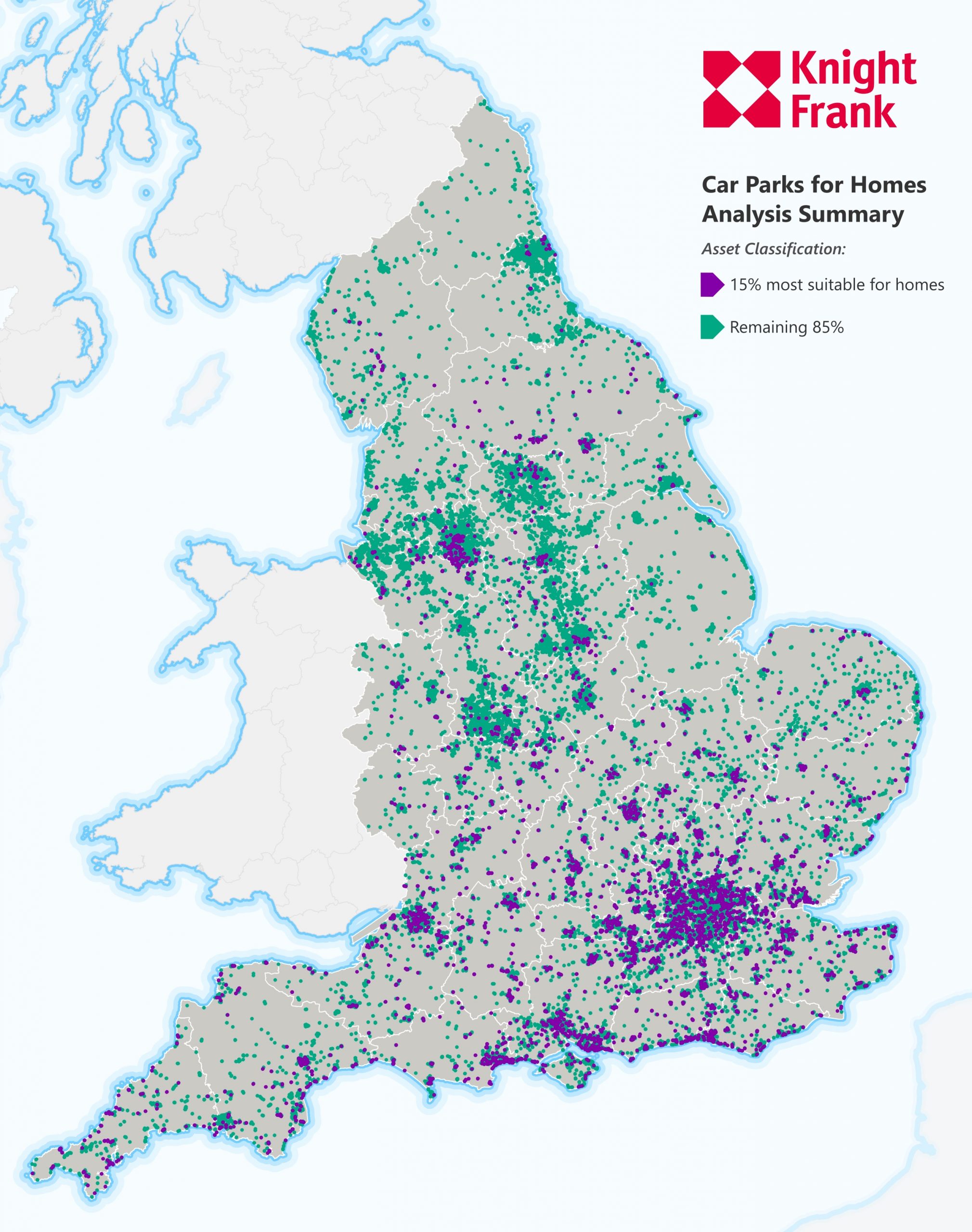 Market potential for housing for seniors

Since the past few years, Knight Frank has been assessing the trends of private Senior Living market in the UK. By 2026, official projections show there will be nearly 12 million people aged 65 or over in England. As the older population rises, the amount of the time spent in ‘retirement’ will also lengthen.

Based on its research, 25% of over-65 will choose Retirement Housing over the next decade. Therefore, there is a potential demand for this type of housing from an additional 582,283 individuals. 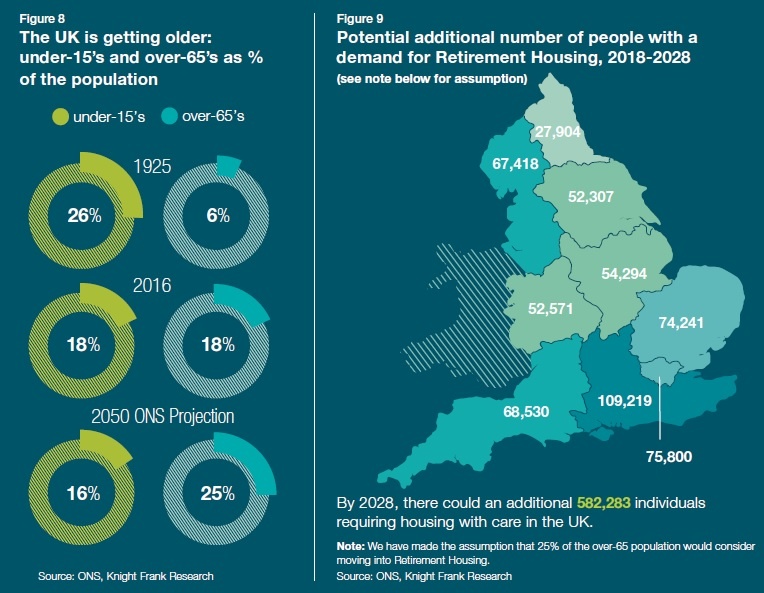 Since the gap between potential pool of demand and current supply is stark, Knight Frank used location intelligence to analyze potential markets for senior housing in the context of location. The firm located concentrations of seniors with the right mix of age, income, and personal interests that distinguishes them from previous generations — economic clout at retirement age and beyond.

It was estimated that although just a third of seniors consider moving into dedicated senior housing, that population will be so large that investors have shown interest in building residential units to suit older consumers around the world. Once the areas where senior population is expected to grow are identified, developer can locate potential properties and determine the most suitable type of development.

Another notable location-based research conducted by the firm is the development of ‘SKYWARD’ – a geospatial method to systematically analyze the potential of rooftop development for buildings in Central London.

In 2017, the UK Government sought to address the scope for higher-density housing in urban locations, particularly “where buildings can be extended upwards by using the ‘airspace’ above them”.

Knight Frank’s study has found that as many as 41,000 new dwellings could be built in central London using rooftop development space, without altering the iconic skyline. This equates to more than 28 million sq ft of potential additional residential floor area. The unused airspace has a potential value of £51 billion ($65 billion).

The analysis establishes a series of principles that can be replicated within planning authorities and potentially inform new planning policies. Similarly, landowners can use SKYWARD to identify opportunities and assess their potential scale and value.

Technology is playing an ever-greater role in real estate and is generating huge amounts of data in the process. Knight Frank is one of the exemplary users that leverages location intelligence for the benefits of its clients.